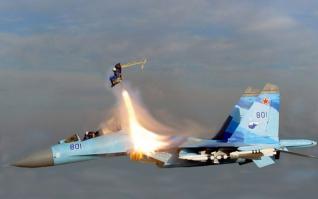 The picture, above, was no accident. The back-seater in this Russian SU-35UB prototype supersonic jet got paid to eject — part of a series of stunts for an upcoming movie.

In another episode, the movie-makers “had to film the jet without a canopy, so rather to film it on the ground [sic] they decided to hire a high-class pilot to make a real flight without that glass thing,” according to English Russia

“The maximum speed I achieved on the jet plane without a canopy glass was around two times greater than speed of sound. While on this speed I even managed to pull out my fingers in glove for an inch or two outside – it became heated very fast because of immense friction force plane undergoes with the air,” the pilot claims.

As a friend tells aerospace blogger Stephen Trimble: “Why use dummies when you can use real Russian pilots? Those guys are amazing.”

BTW, if you’d like a former Soviet bloc fighter jet of your own, a dealer in Illinois has a proposition for you.