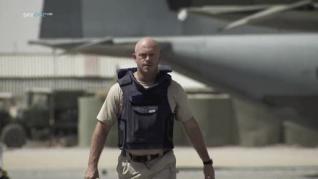 ROSS KEMP has been dreaming about Afghanistan since he returned from the front line of Helmand Province.

In one nightmare, he is playing football against the Taliban in the dark and the ball is an explosive. The opponents are wearing Afghan dishdasha robes, he is wearing body armour.

No-one knows when the explosive is going to go off, so they keep passing it back and forth across the halfway line.

“I always awoke before the explosion, safely in my comfortable bed at home,” he writes in his new book to accompany his award- winning Sky1 series, Ross Kemp On Afghanistan.

Anyone who missed the two documentary series filmed in 2007 and again in 2008, missed a frightening, exciting, eye- opener of what the war is really like out there.

Kemp joined his father’s old regiment, the Royal Anglians, and after training on Salisbury Plain and learning how to use the SA80 A2 standard rifle of the British Army, he and his camera crew found themselves in the thick of it in the Taliban stronghold.

The series wasn’t airbrushed, he wasn’t reporting from a distance like many war correspondents – it was real. During their time out there they were ambushed, shot at frequently and saw death first-hand.

They ate the same unpalatable ration packs as the troops, suffered the same discomfort of searing 50-degree heat and accompanying hygiene problems. There was no sneaking off to some five-star hotel when filming was over for the day.

Today, he talks candidly about his time there, but you sense he’s wary of journalists, and there’s an edge, a mistrust, a fear of hidden agendas in anything which appears in print about him.

As someone who was married to Rebekah Wade, the first female editor of The Sun, until their divorce earlier this year (although they had been separated for several years), he probably knows the machinations of the media better than most and has always refused to discuss his private life. Today is no exception.

However, he has changed since Afghanistan, he says.

There’s no doubt his experiences as an observer of the conflict have changed him.

“I think I appreciate life a bit more. We all fall victim to being rats in a rat race, but I’ve slowed down a bit. I’m more appreciative of the good things in life.

”I’m maybe a little bit more patient with myself. When I see people getting het up in traffic, which used to be one of my specialities, I’m a bit more considered in my reaction to other people’s bad driving rather than my own.

“There are some young men I met when I was out there, who didn’t come home alive, and I’ve had to look into the eyes of their families and see the devastation wreaked not just on their immediate family but their friends as well, so I appreciate life a lot more.”

Being in the middle of a war zone was a far cry from his life in London, when he was married to newspaper editor Rebekah Wade(they divorced earlier this year. They were a formidable couple and mixed in celebrity and political circles.

They married in Las Vegas in 2002, hobnobbed with the Blairs, the Browns and other influential characters and were seen as Labour Party luvvies.

Then, in 2005, his private life hit the headlines when police were called to his house after a disturbance that led to the arrest of his wife, who had allegedly left him with a split lip.

She was later released without charge and referred to the incident as “a silly row”, saying Kemp’s cut lip had been sustained during filming. He has never discussed it and isn’t about to do so now.

The Essex-born son of a policeman and a hairdresser, Kemp, who was divorced from newspaper editor Rebekah Wade earlier this year, has always been known as the “hard man” of telly, first as the tough Grant Mitchell in EastEnders and later in the ITV series Ultimate Force as the hard-boiled SAS sergeant Henry “Henno” Garvie. His first foray into documentaries won him a Bafta for best factual series in 2007 with Ross Kemp On Gangs, as he travelled the world interviewing gun-toting, drug-addled gangsters. In one episode he came to Liverpool to meet up with teenage gangs operating around Norris Green and Croxteth.

He has just returned from Indonesia, where he was filming his new series on pirates which has just premiered on Sky. It was another pretty dangerous excursion, and doesn’t do much to shake his hard man tag.

He sighs loudly: “I don’t care,” although he clearly does. “If that’s how people want to perceive me, then that’s entirely up to them, as long as they don’t keep knocking at my door and telling me.

“I mean, the newspapers can’t put my name just as Ross Kemp, they have to put ‘the hard man of TV’ or ‘Ex-EastEnder’. The press like to box you, as we do as a society. I accept it and get on with my life. It won’t change the way I eat my spaghetti.”

But Kemp, who is patron of the charity Help For Heroes, which supports injured troops, is resentful of the fact that British soldiers who die fighting in Afghanistan receive less newspaper coverage than celebrities’ love lives.

“A celebrity split in a marriage seems to get more coverage, and the country has to be in national mourning over a celebrity’s poodle dying rather than a soldier dying in Afghanistan, of course that upsets me,” he says.

“But that’s the way our society works. I just hope that people don’t forget that there are boys out there right now on patrol risking their lives.”

ROSS KEMP will be signing copies of his book at Waterstone’s, in Liverpool One, on July 8, from 1.30pm.

Kemp, who is patron of the charity Help For Heroes which supports injured troops, visited Headley Court military rehab centre to speak to soldiers there and, despite the horrific injuries some had suffered, found it an inspiring experience.

He recalls one patient who was almost completely paralysed and could only communicate with a spelling pad and pencil. Kemp sat by his bedside as the soldier spelled out a question for him.

He keeps in touch with many of the officers in the regiment and says he may return to Afghanistan, but not immediately.

In the meantime, he’s up for offers, whether in acting or factual series.

“At the moment, I see myself having to pay the mortgage so I’ll do whatever comes along,” he half jokes. “I did acting for a long time and I’ve now done this for five years non-stop. I’m very lucky to be in the situation that I’m in and I’m not going to make any sweeping statements about what I want to do in the future. At the moment, I think I just want to take a holiday.

“The Grant Mitchell tag will always be there to a certain extent, but it was 10 years of my life, it wasn’t all my life.”