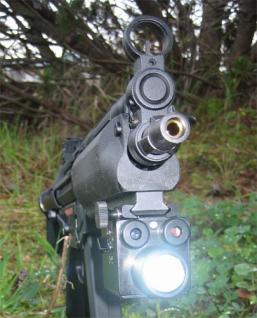 The cFL laser and light system combines a high-power LED flashlight, visible and invisible laser, and IR illuminator, in a single sturdy module.

Industrial Laser and Electronic Engineering (ILEE) was founded in 1977 and built the first target laser for small arms in 1983. Ever since, ILEE lasers have been successfully used under typical infantry conditions and are renowned for reliability and sturdiness.

Our expertise enables us to offer a target designator for most small arms. ILEE is a subsidiary of Oerlikon Contraves, part of Rheinmetall Defence.

We are committed to quality, are ISO9001 certified and have regular verification audits from the Swiss quality agency SQS.

The cFL laser and light module combines a high-power flashlight, visible and invisible laser and an IR illuminator in a single sturdy module. The system incorporates all options for tactical target designation in an extremely small package with minimal weight.

The cFL laser is fitted with two of the following laser inserts:

Whilst standard lasers are of a defined wavelength and setting, the TwinBeam laser meets the increasing demands on target lasers to be of full usage whatever the conditions require.

The two inserts can be selected from a range of basic laser sources. Each insert can be independently adjusted in the X and Y axes, making the TwinBeam laser a truly unique tool for rapid deployment forces and special police units. TwinBeam lasers can be fitted with any two of the following laser inserts:

A hybrid system which incorporates the advantages of a passive and an active target system in a compact and unique package. The MTB Hybrid target system consists of an Aimpoint MicroT1 red dot sight and an ILEE TwinBeam tactical Laser and is the ultimate tool to aim with ease and precision in day or night time and in any weather condition. The Hybrid MTB is also a truly unique tool for rapid deployment forces and special police units which rely on a full battlefield illumination in the dark when active with NVG’s indoors or outdoors in an urban environment.

For use in daylight the Aimpoint MicroT1 red dot sight is used to aim at the target quickly and precisely. At night time when NVG’s are used, the advantages of the ‘Urban’ TwinBeam Laser can be fully exploited. During night time operations the active IR laser marks the target. At the same time the high performance infrared illumination module provides full battlefield illumination. The visibility of the aiming laser is guaranteed as the illumination module is suitable for use with lasers in eye safe settings.

Both system elements have their own power supply making them fully redundant and independent in operation.

The SingleBeam is a TwinBeam laser with only one laser fitted. It has more battery life than the SingleBeamCompact laser and is available as a handheld laser target designator.

Laser systems for pistols meet the high demands on sturdiness and availability generally required by the professional user, and thus all operational criteria. The visible or IR laser has a precise mechanism for fine X / Y adjustment and is attached to the pistol by an interlocked fixture.

REM laser systems meet the high demands on sturdiness and availability required in infantry use. The beam has a patented, precise mechanism for fine X / Y adjustment. Because of this, REM systems are a reliable tool for infantry units that require a target system. REM systems are available in the following standard beam configurations:

The automated LTE007 test and support system is unique in providing a full case history of an individual target laser performance over time. The automated process test can be applied at logistic support level before or after field issue to troops.

The BarrelBeam laser allows the correct adjustment of target lasers or optical sights. By adjusting the X and Y axes of the laser, the laser can be set to the exact centre of the barrel, providing a reference beam for adjustment of the targeting device. It is available with red visible beam or infrared invisible beam.

All our laser and laser inserts have a choice of wavelength and power setting to suit your particular needs.

The Jula family of adjustable laser inserts are used as add-on lasers or for integration in observation systems using thermal-imaging cameras. Jula lasers can be fitted with two of the following laser inserts:

The Goliath laser system is a high-power IR laser for long-range target designation. It is fitted with an IR CW or pulsed laser with an output power of up to 1W.