The Ministry of Defence has showcased current and next-generation unmanned aerial vehicles (UAV).

The event was held as part of National Science and Engineering Week – an annual event celebrating science, engineering and technology – and to give manufacturers the chance to show off some of their creations.

Military use of UAVs has been growing fast. Twenty years ago, they were a bonus item for the armed forces, now they are seen as an essential part of the modern warrior’s arsenal.

UAVs are mainly used for reconnaissance, although some of the larger models can also drop weapons.

On show was equipment currently deployed in Iraq and Afghanistan, as well as prototypes and models of new technology that could be in service in the next few years.

The role of unmanned vehicles was to do “dull, dirty, and dangerous work and lessen the risk to the troops,” said General Andrew Figgures, the officer in charge of MoD procurement, at the event..

Built by Honeywell, this 8kg hovering air vehicle carries a regular and night vision camera, enabling troops to get a stable eye-in-the-sky.

Speaking to the BBC, Adrian Harding from Honeywell, said the device was almost unique in the market.

“Unlike most other UAVs, which have to make numerous passes over a target, we can hover overhead and have constant eyes on the ground,” he said.

Thales’ UAV is already in active service in both Iraq and Afghanistan. Unlike many UAVs, Watchkeeper does not need to be “flown” by an operator. The device is autonomous, choosing the best flight path to get to a destination set by an operator.

Speaking to the BBC, Sergeant David Alexander – serving with the 32 Regiment, Royal Artillery – said that the Watchkeeper had already helped save lives.

“It’s easy to operate. Really easy. We have two-man teams, one who directs where the aircraft needs to go, and the other who monitors the images coming in.

“The work is really satisfying as you help save lives.”

The successor to the well known Predator UAV, the Reaper gives the armed forces a larger, faster aircraft with a greater payload.

Originally called Predator B, the aircraft has been designed to perform high-altitude surveillance, reconnaissance and so-called hunter-killer missions.

The Reaper is already in service with the RAF and USAF and the developers are working on further modifications.

Another UAV, but much smaller than Reaper, Desert Hawk III is a hand-launched drone that is used by troops to carry out surveillance. The device fits inside a backpack carried by troops.

Developed by Lockheed Martin, the UAV has a range of up to 15km and can be in the air for up to 90 minutes.

At present, an operator controls the Desert Hawk III from a laptop and transmitter, although the developers are working on a customised and more durable control system.

British firms are also working on small UAVs that can be carried in a backpack.

Birmingham-based Sonic Communications has built the Casper 250 Man-pack, a battery-powered UAV that is ready for launched within 20 minutes of being unpacked.

The developer’s say the device becomes “silent and invisible” once it reaches 100m, can stay airborne for more than 90 minutes and has a range of 12 miles.

Casper has two interchangeable cameras, for night or day use, and can transmit the images either directly to the ground control station or to a command and control centre.

Mantis is a large pilotless aircraft, with a wingspan of 22m, can stay airborne for more than 24 hours and operate at more than 40,000 feet.

Speaking to the BBC, BAE’s head of communications, Adam Morrison, said the Mantis could survey or patrol an area with great accuracy.

“Most UAVs are controlled on the ground, even if that control is a bunker somewhere in the US. Because of the human element, you’re never going to get a precise and regular course over time.

“With Mantis, you can cover an area with almost regular monotony, which means not only constant coverage, but you can spot if anything in that area has changed.

“You could also use it for maritime patrol and with the autonomous nature of the plane, all you need to tell it is which airfield it takes off and lands at, the length of runway and off it goes.”

The other UAV it is working on – Taranis – is very different. The £124m, four year project to develop it hopes to create an unmanned, stealth, deep-strike aircraft as part of the Government’s strategic unmanned air vehicle experiment. 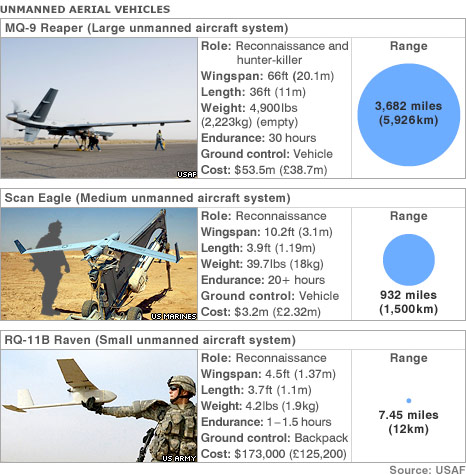