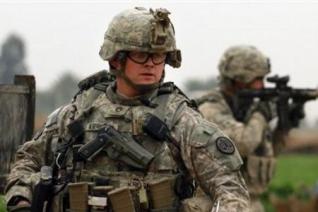 Two American troopers have died in Iraq, succumbing to the injuries sustained during an earlier attack by militants in the war-torn country.

The US Military described the cause of deaths as “wounds suffered when enemy forces attacked their unit with indirect fire,” apparently referring to mortar or rocket attacks.

The statement, however, did not mention the location of the attack.

The fatalities took to 4,443 the number of the US military deaths in the war-torn country.

The US led the invasion of Iraq in 2003, under the pretexts that former dictator Saddam Hussein was in possession of weapons of mass destruction.

However, later it was revealed that not only the former Iraqi regime was not in possession of the arms, but also that the US and British leaders, who had defended the military action, knew about the non-existence of such weapons.

Over one million Iraqis have been killed during the invasion, according to the California-based investigative organization Project Censored.

The forces are obligated to withdraw by the end of the year in line with a bilateral accord.

Iraq’s Prime Minister Nouri al-Maliki has warned against any extension to the foreign presence on the strife-weary country’s soil beyond the deadline.