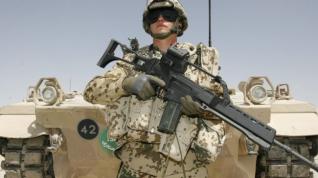 An American soldier serving with the US-led International Security Assistance Force (ISAF) has been killed in a militant attack on a base in eastern Afghanistan.

A US defense official, speaking on condition of anonymity, said the soldier was killed on Wednesday in the attack on the base that hosts troops from the United States and Poland in Ghazni province, AFP reported.

The official did not provide further details.

Ghanzi province’s deputy governor, Mohammad Ali Ahmadi, said that attackers detonated an explosive-laden truck at the rear of the base and a car bomb at the main gate, before a one-hour gun battle inside involving up to 10 militants.

The Polish Defense Ministry said ten of its soldiers had been injured and hospitalized after the attack.

The ministry added that one Polish soldier was in a critical but stable condition, two received serious wounds while seven more were lightly wounded.

Ahmadi said that four policemen and three civilians had been killed, and 52 members of the Afghan security forces and civilians injured by the time the fighting ended around 10 p.m. local time (1730 GMT).

With around 1,200 troops deployed in the province, Poland is the lead contributor to the ISAF.

Since the beginning of 2013, 120 foreign soldiers have lost their lives in the war-ravaged country, with 93 of them being Americans.

According to the website icasualties.org, 3,369 foreign soldiers have been killed in Afghanistan since the US-led war began in 2001.

The increasing number of military casualties in Afghanistan has caused widespread anger in the US and other NATO member states, undermining public support for the Afghan war.

The United States and its allies invaded Afghanistan in October 2001 as part of Washington’s so-called war on terror. The offensive removed the Taliban from power, but insecurity continues to rise across Afghanistan, despite the presence of thousands of US-led troops.