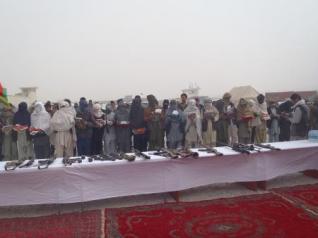 The history books in Panjwa’i district, Kandahar province, Afghanistan, has historically been written by the Taliban. Known more commonly as the birthplace of the Taliban and a strategic stronghold for the insurgents, each chapter in Panjwa’i holds stories of insurgents’ dominance with little to no resistance from either Afghan or coalition forces.

In July, the 1st Stryker Brigade Combat Team, 25th Infantry Division, operating as Task Force Arctic Wolves, moved into the area and began a partnership with Afghan forces in an effort to begin writing a new chapter, one that the people of Afghanistan controlled instead of the insurgents.

During Operation Hope Hero 58, more than 400 ANSF planned, coordinated and executed a multi-agency operation, a challenging feat for even developed security forces.

During the clearing process, the independent Afghan force discovered multiple caches containing a large amount of bomb-making material, including ammunition, more than ten pressure plates, ignition systems, over 1,000 lbs of homemade explosives and enough material to make more than 60 IEDs.

In addition to uncovering and destroying a significant amount of insurgents’ weapon supply, the ANSF destroyed multiple insurgent fighting positions.

The operation, which came to an end Friday, was an important step for both ANSF and coalition forces as talks of troop withdrawals demand much of the public’s attention.

For the 1st Brigade, 205th ANA, the success of the mission was the culmination of a five-year partnership in the Panjwa’i district.

For more than three years, Canadian forces worked shoulder to shoulder, or in Pashto, “shona ba shona,” so much so that ISAF adopted the phrase as their campaign slogan.

Through continuous partnered operations, coalition forces and Afghan National Security Forces progressively moved deeper and deeper into one of the most hostile environments in Afghanistan.

In July, Task Force Arctic Wolves, led by Col. Todd R. Wood, took over for the Canadian forces, and within just three-short months, an Afghan-U.S. combat outpost, COP Lion, located deep in the Horn of Panjwa’i, typically a unexplored region, was opened.

The new outpost allowed Afghan forces to oversee and monitor routes often used by insurgents and gave them the upper hand in limiting the movement of weapons, explosives and illicit drug operations.

The term “shona ba shona” was dropped, therefore initiating the start of Afghan-led and independent missions in Panjwa’i, helping further progress toward transition and enabling ANSF to assume full responsibility for security in the area.

Recognizing the significant improvements in local security, 50 militants laid down their weapons and joined the peace process last Tuesday at the Panjwa’i District Center. The reintegration of the former insurgent fighters was part of the Afghan reconciliation program and was recognized as one of the largest and most visible signs of improvement in recent history. Panjwa’i District Governor Hajji Fazzludin Agha works closely with local ANSF to enable the formal and informal reintegration process.

The two sides agree that there is still work to be done but acknowledged the importance of Operation Hope Hero 58 as a major step toward transitioning security operations from ISAF to ANSF.